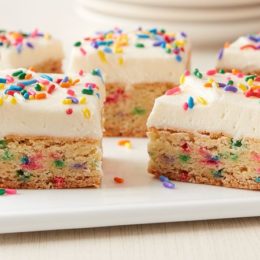 Cakes are made lightly by tiny bubbles of air or gas which have been introduced into the mixture during the making. The air or gas is usually introduced by one or more of the following ways:-

Most cake mixture is made light and spongy by two or all three of these methods.

The action of baking powder.

Baking powder consists of an acid such as cream of tartar and an alkali, usually bicarbonate of soda. These two substances are mixed together in the correct proportions and when moisture is added, effervescence takes place and tiny bubbles of carbon dioxide are given off. When heat is applied to the mixture, more gas is given off and at the same time the heat expands the bubbles of gas which will make the mixture well risen and spongy.

The action of baking powder is a quick one. It starts as soon as moisture is added and after a while it works itself out. It is therefore important to remember that any mixture containing a chemical raising agent should be cooked as soon as possible after mixing, otherwise the action will have worked itself out before the cake is in the oven.

It is necessary to grease the baking tins or patty tins to prevent sticking. This can be done by rubbing the inside of the tin with greased paper, or by brushing with melted fat until the bottom and sides are evenly coated with a thin film of fat. Remember to grease the corners and right up the sides of the tin. The tin can then be dredged with flour and any excess flour should be removed by turning the tin upside down and gently tapping all over the sides. Cakes baked in ‘greased and floured’ tins have nice crusts and are very easy to remove from the tins.

The high sugar and fat content makes creamed cake mixtures burn more readily than plain cake mixtures. It is therefore better to line tin for rich cakes. To line a round tin, take a strip of greaseproof paper &frac12;” higher than the tin. So that it will be long enough to go right around it. Fold up &frac12;”along one long edge of the strip of paper and snip the folded strip at 1″ intervals. Fit this strip inside the tin so that the snipped edge lies flat on the base of the tin. Cut a round of paper the size of the base of the tin and fit this round of paper on top of the snipped edge of the paper. Sandwich tins need only be lined at the bottom. Grease the sides and lined base to prevent sticking.